I translated afterword and acknowledgements from the translators in the Japanese edition of Everyday Rails Testing with RSpec in order to share our feelings with Aaron and Leanpub staff. 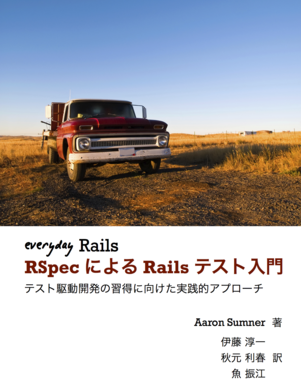 Here are afterwords from the translators. Japanese versions are written here:
https://leanpub.com/everydayrailsrspec-jp/read#leanpub-auto-section-22

But my one has two versions. Once I wrote afterword but it was too long, so I rewrite a short version for the book. I mixed both into the following translation. The long version is written here:
http://blog.jnito.com/entry/2014/02/28/105922

I was using RSpec frequently, so I had learned how to use it. But I was not so good at using it. I sometimes got stuck and spent long time or struggled with fat specs. I used to write model specs, but was not good at writing controller specs and feature specs.

That was my true encounter with Everyday Rails Testing with RSpec.

I expected more advanced topics, but it was very easy even for RSpec newbies. That said, every sample code was very practical and very useful template for me. I could write controller specs and feature specs well according to the explanation in this book. As for fat specs, Aaron says "it's okay to bend the DRY principle in the interest of readability." He did rescue a DRY-believer(that's me) from the stuck.

I simply thought it was a good book, so I introduced it in my blog and sent a twitter message to Aaron. But at that point I did not think I was going to translate it at all. In the blog post I said "Let's read it in English because it's a good way to learn English!" But after five months, I finished the translation and am writing afterword like this. No one knows what will happen in the future.

The biggest reason for this translation is because I wanted to provide a good RSpec book for Japanese Rails programmers. In Japan there are so many books about Rails development. There is also a RSpec book translated into Japanese (The RSpec Book). But there are no technical books specified for testing Rails with RSpec. Both Rails and RSpec are popular framework/testing tool in Japan, though. I was sometimes asked "What should I do to learn testing Rails application with RSpec?" I always recommended Everyday Rails Testing with RSpec for such questions, but if he or she does not have a custom to read English books, I guess they might answer "That's not my option" in their mind.

I think there are many Rails programmers who don't know how to write specs with RSpec in Japan. And I guess many of them give up reading English books from the start. Then, if I translate Everyday Rails Testing with RSpec, they might become happy--this is why I decided to translate this book.

However the translation work was very tough for me. I never dreamed how difficult to translate English sentences into Japanese sentences that are correct, easy to understand and readable. I wrote such stories in my blog, so please refer it for details.

But with our work, I believe this book can change the situation for all Japanese Rails programmers. If you understand the techniques and apply them to your application, you can improve your testing skills. Not only use your eyes to read but also use your hands and head to learn them!

Finally, thanks to my family. I am not Superman but just an ordinary person, so I had to reduce time for my family in order to translate this book. They might feel missing me. I would like to have a trip with you after my work is finished.

We are proud to release this book for Rails/RSpec learners. We translators also learn RSpec with this book. I believe it would give you very nice learning experience. And I am very glad that I was able to join the translation team for this book. I thank Aaron for such a nice book. And I also thank readers. I hope you would enjoy happy Ruby Life.

The translation work was harder than I expected. After finishing this work, I realized the great efforts of translators who translated books I ever read. But it was very precious experience for me to think of how to write good Japanese sentences.

Finally, thank you to my wife and my cat. You supported me while I was working on my regular work, translation work and activities for programmer-communities.

I am very glad that I was able to join this translation team and release this book without any problems. But looking back this project, it was very hard for me.

I once read the Chinese edition (Note: he came from China). At that time Japanese edition did not exist, so I wished to translate it (but did not start.) After a while, in October 2013 Ito-san introduced this book in his blog and I was able to believe this book was very valuable, so decided to translate. I asked Aaron for translation and started the work. However I struggled with translation from the start and realized it would be difficult to progress by myself. In November 2013 Ito-san asked me for cooperation and the project restarted. He led this project instead of me. From December 2013, Akimoto-san also joined this project and helped me a lot.

Without their help I would not be able to complete this translation. I really appreciate them. And I hope our work would support your happy development.

But sorry, I omitted the translation of acknowledgements for Japanese people.

We exchanged lots of messages with Aaron. He kindly answered every time. We really appreciate his support. By the way, please be sure that his last name is "Sumner", not "Summer."(Some of us made a mistake too :P)

And thanks to Leanpub staff. Since Leanpub is a foreign service, there are some wrong formatting in the book due to differences between languages. Mike, Scott and Peter patiently supported us and improved their service according to our requests. Thanks to their efforts, we have got a very beautiful Japanese ebook.

Translation members are three but might be four. P. Michael Holland, an English Rubyist living in Japan and a member of Nishiwaki.rb, gave us great help for translation. Without his bridge across English and Japanese, this work would be much harder. We all thank him very much.

It is true the translation work was not easy, but we were able to release the Japanese version and are now happy. I would be glad if we could share our feelings with people living in overseas.